Winchester, Wilton Abbey and the Women of the Bayeux Tapestry

I am delighted to welcome Carol McGrath to my blog to talk about the inspiration behind her lovely debut novel, The Hand-Fasted Wife.

Deborah: I have to say, I just finished the book and found it to be a substantial treasure trove of historical information about the 11th century, as well as a gripping story. Edith Swan-Neck is a character with stubborn integrity who remains faithful to her hand-fasted husband despite the Norman invaders. Forced to flee to Ireland, she undergoes a series of adventures which test her courage and that of Padar, her companion. Equally suitable I would think for both a male and female readership this is a book that speaks for all those who have had to endure being exiles from their own land. It is beautifully written portrait of a more violent time and the many well-researched details bring the period lushly to life. I knew very little about this era in history, and as all the best historical fiction should, it both entertained and educated me.

I said to Carol that every schoolchild has heard of The Bayeux Tapestry, but not everyone sees the women’s stories behind it.

Carol:
This is true and particularly so as The Tapestry may have been designed by Canterbury monks or a monk and possibly embroidered in several locations. Carola Hicks is one of several tapestry historians who thought it may have been embroidered at Wilton Abbey where there was a school for embroiders at this time. Various panels may have been embroidered in several locations, most probably Wilton and Canterbury. Some of the patterns for the images appear to be from The Canterbury School of Anglo-Saxon art. Others are similar to Winchester manuscript work. Queen Edith, Edward the Confessor’s wife, and Harold’s sister, was known to be one of England’s best embroiders at this time and she is very closely linked with both Winchester and Wilton Abbey. She retired to Wilton, after The Norman Conquest where as a young girl she had been educated and where during the late 1050s she had rebuilt part of the Abbey Church paralleling her husband’s work on Westminster. This explains how the first half of The Tapestry focuses on The Godwinson Story, on Harold and how the Death of King Edward has centre stage in the Tapestry.

There are three women depicted on The Tapestry. The first, a nun, being touched by a priest probably alludes to Edith’s sister who may have been an Abbess at this abbey and who allegedly was cured of blindness in the 1050s by St Edith. The second woman is thought to be Edith herself at the feet of her dying husband King Edward. Then there is the third. She is running away with her child from a burning house. At least one Tapestry historian Andrew Bridgeford thinks she could be Edith Swan-Neck, Elditha of The Handfasted Wife fleeing from her estate just before The Battle of Hastings. The little boy is considered to be Ulf, hers and King Harold’s youngest son, who was at some point in 1066 ( unknown exact date but confirmed in chronicle) taken as a hostage into Normandy and not released for decades. That information is recorded in a contemporary chronicle recounted by John of Worcester.

Thus by this theory the Godwin women do indeed appear on the Tapestry. There is, interestingly, a Wikipedia entry for Alain of Brittany (which I had not read until very recently) that suggests he first met Harold’s handfasted or common-law wife, Edith Swan-Neck, when she was held as a hostage before the Battle of Hastings in William’s camp. And I thought I had made this up!

I have great sympathy with the Tapestry embroiderers whoever they may have been because I am convinced that the Tapestry allows an English perspective and then half way through takes up the Norman perspective. It is beautifully executed and an invaluable enduring primary resource. The more one researches it the more intricate it becomes. There is layer upon layer of story, allegory, culture and history woven into it revealing life in 1065/66- hunting in peacetime-Harold is always depicted with his hawk on his wrist, feasting, and, sadly, Conquest with little details including perfect, very life-like horses and somehow it portrays the sorrow of war with its Golgotha of skeletons, importantly, not just for the men but, of course, for their widows and daughters too as the Burning House vignette shows us. 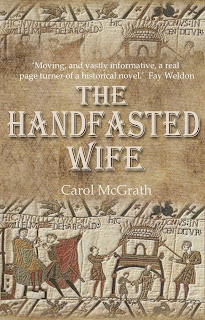 I asked Carol what it must have been like for the women undergoing these great changes.

The Eleventh Century was a pivotal time for England when all that was familiar was swept away. I try to convey how this felt for the noble women in my novel. Many women either went into sanctuary in convents. Some intermarried with Normans who sought to somehow legitimise their land-grab especially after the Pope decided to cash in and demand his cut for land taken illegitimately and those slain at Hastings. That is a complex issue that I do not have space to expand on here, but it significantly underpins why many aristocratic women went south-west with Gytha, Harold’s mother in 1066 to Exeter, her dower city, where they faced a terrible three week long siege. All this is fictionalised in The Handfasted Wife. In truth I think these women hoped that Harold’s sons and their uncle would sweep across the Irish Sea with Danish and Irish help and destroy the Conqueror but I do think they would realise by the fall of Exeter that by 1068 reversal was well-nigh impossible, too many collaborators in the south at high level. Fortunately, the women were permitted some degree of financial security, but no more spoilers. I have said enough.

How did you research the period - apart from of course using the Tapestry?

As always with historical fiction the easiest aspects to research are every-day life. My great treasure is The Bodleian Library in Oxford. I can do every day research from secondary material but I also study manuscripts and chronicles and find information from depictions on calendars and in 11th century writings such as poetry, riddles and sermons. The most difficult bit is the analysis of chronicle writings and trying to piece together how women might have thought about their life. Religion is important as the concept of religion then was very different. The church’s view generally concerning women and sin is alien. Easier is the fact that the human being has emotions that are expressed through motivation, jealousy, avarice, empathy, love, understanding and so on. The mores of the time dictates how these emotions manifest themselves. Conditions were so different that if I totally wrote the 11th century woman’s lot, not allowing any twenty-first sensibilities to creep in at all, a reader might not want to read this work of fiction. I shall save those revelations for a non-fiction book on the Women of Hastings and I guess in historical fiction there will always be a little compromise, and since it is done knowingly, that choice or selection can be very difficult.

What's next? Is there a sequel planned?

And so now I am on the final chapter of the second novel in this trilogy (The Daughters of Hastings). My new work, Countess of the North(working title) is Gunnhild’s story. She was King Harold’s younger daughter, and she really did elope from Wilton Abbey with an enemy knight. She, in time, becomes involved in a love triangle, precisely how is not clear historically. Therefore, I have used recent analysis for this story which was some years ago written up in Haskins Journal. I have translated this into a very romantic piece indeed.

Many thanks to Carol for taking the time from her final chapter to chat to me! And do check out all the great reviews for The Hand-Fasted Wife by clicking on the book.
Find out more about Carol's writing here
Posted by Deborah Swift at 08:18 3 comments: