My page proofs have arrived! 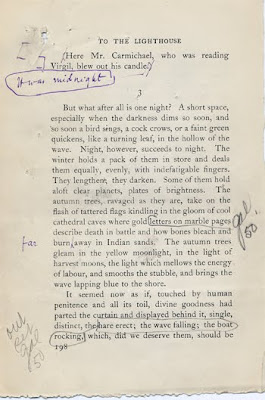 At last I can see what the inside of my book will look like and how it will read when it is printed. I am relieved to see the type is nice and easy to read and the chapter headings in a lovely appropriate olde-worlde type. Few people realise how much difference the design of the inside of a book can make, but recently I have become obsessed with it. Now I can breathe a sigh of relief!

It is strange to be enjoying reading my own book again, as I had semi-forgotten it, being immersed in the next. But it is also a frightening process as I discover a lot more editing I should have done, and which it is now too late for, as it is set in type. Above is a corrected page proof of To The Lighthouse by Virginia Woolf. I guess in 1927 when there were no computers, the writer was allowed to make more generous alterations to the text.

But it is one step nearer to having my book in my hand, so time for a little glass of wine...
Posted by Deborah Swift at 15:31 5 comments:

Email ThisBlogThis!Share to TwitterShare to FacebookShare to Pinterest
Labels: Page Proofs, Publishing Process, To the Lighthouse 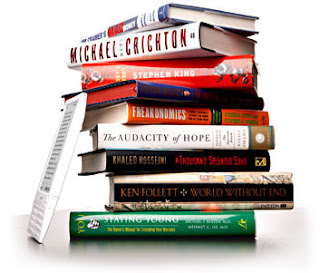 Q.How many ways can you order 8 books on a bookshelf?

A. If I am ever stranded on a desert island I will need to take eight books, because there are actually forty thousand three hundred and twenty ways of ordering them, and if I get bored with reading the books I can always spend a few years re-arranging them on the shelf.

Which led me to think - which eight books? So many more possibilities than the usual Bible and William Shakespeare. Any ideas? Or is the idea of choosing just torture?
Posted by Deborah Swift at 11:03 No comments:

Research and The Jigsaw of my Plot

The current work in progress is all in pieces on my living room floor whilst I search for the proper way to fit the plot together. It is like doing a jigsaw where you are missing some pieces (probably the edge pieces that hold the thing together) and have been given other pieces from a different puzzle that don't fit.

The book is complete in that it has a beginning, middle and end, but I am juggling the scenes to get a smoother read. Part of this has been to combine characters that have the same function - I seem to write far too many antagonists, and this made the plot feel bitty. But in losing one of the characters I am finding I have gaps  - hence looking for the missing pieces.

What has saved me though has been more research. By delving again into the period and real events I have found that I can fill the gaps not with characters but with the character of the landcape of Restoration London which is always fascinatingly strange.

In my investigations into Frost Fairs I discovered this bizarre picture of the frozen Thames with icebergs at least six feet thick, formed when the tide rose and froze. When the tide fell away the icebergs were left above the re-frozen surface making a jagged lunar landscape. London bridge is shown just behind with its houses perched on top. This strange arctic terrain in the middle of London has inspired me to explore the character of the Thames a lot more which enables me to have another antagonist (the Thames) without cluttering the plot with too many characters. 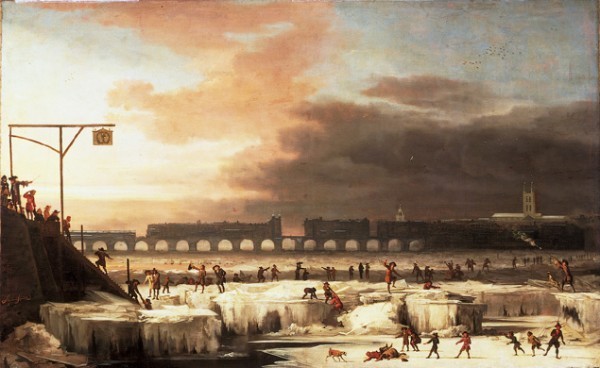 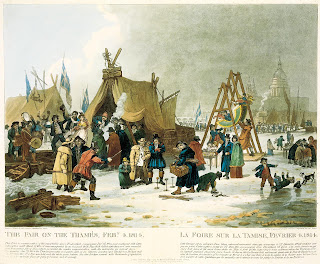 Back in England in the deep freeze of the past few weeks, I am appropriately enough researching Frost Fairs - a sort of 17th century festival that went on when the Thames was frozen over. 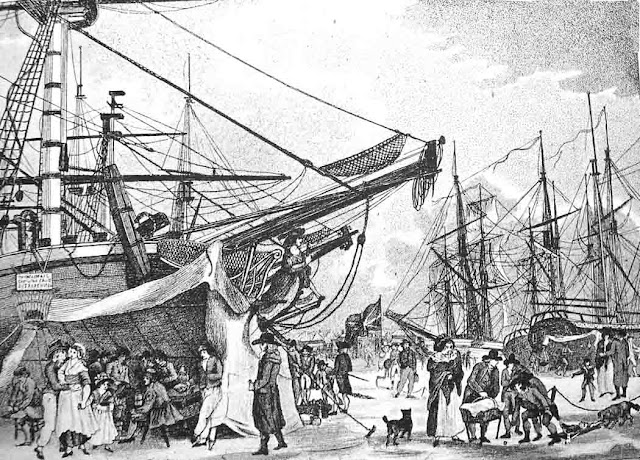 The last large Frost Fair was in 1814, whilst the supports for the old London Bridge kept the river flowing slowly enough to freeze in cold weather. But in the period I am writing about, sometimes also known as the "little ice age" because of the severe winters,  there were several, where almost a mini-town grew up on the ice, with games such as chair-pushing, taverns selling hot ale, and of course skating. I believe these colourful events have featured in other people's historical novels, but I have never come across them in my reading. If you know of a novel featuring a Frost Fair, please let me know.
Posted by Deborah Swift at 03:39 2 comments:

Happy New Year!
I am back in England having spent just over a month in Thailand. Whilst I was there I was thinking over my current work in progress - a novel set in Restoration England. Surprisingly, living in a small village in Thailand has got material to offer someone working on a historical novel, as the way of life is one which is pre-industrial. There is nothing like living a third world life to remind us of how far we have moved from "life on the land". And the sights, smells, noise of 3am roosters, and debates over which animal to kill for christmas dinner will probably feature with fresh detail in my re-writes.

Whilst browsing in the foreign bookshops I was amazed at the different sizes of books on offer. Airport Specials - huge paperback tomes, surely too unwieldy to fit comfortably in hand luggage. French Editions - small enough (some would say too small) to fit in hand luggage but with very small cramped type. Hardbacks the size of paperbacks - usually in German with lurid cover art. American paperbacks - smaller than an Airport Special but certainly taller than our standard British paperpack.

Am I alone in preferring that all my paperback fiction should fit rasonably onto the same size shelf? Do they make smaller bookshelves in France? Where will I shelve my Airport Edition of "Wolf Hall"?
Posted by Deborah Swift at 03:32 2 comments: