The world is filled with similes, but the act of writing gets more than its fair share of them. Writing is like having a baby, or spilling your heart on to the page. It’s like living with a house filled with strangers or doing a jigsaw puzzle without the front of the box to guide you.

I love these similes, but I’m not sure anyone has ever come up with a great comparison between writing and doing anything else. It’s a unique activity. You sit still and you think, and you think, and you sit. You tap on a keyboard, and you might go out to a library or a café once in a while, but mainly you write, every day, whenever you get the chance, and in the end a story is created.

That’s not so punchy as saying writing is like tap dancing naked in the rain, though, is it?

Here are three of my own writing similes. Let’s kick off with vegetables. Writing is like a vegetable. Here’s why:

1. ...planting potatoes. You have to wait for the basic idea to start sprouting before you can stick it underground and let it work its way up to the surface. And when it gets to the surface and starts flowering you should put more earth around the base for a better yield. So that when you finally dig it up and start writing that novel, there are so many ideas under the surface that it's potato salad all round. Metaphorically speaking.

2. ....a broad bean. You don't want to overcook that baby or it's going to end up leathery.

3. ...making coleslaw. Make sure you shred the prose cabbage so finely that by the time you add the mayonnaise of the finishing touches the whole novel slips down nice and easy. Bleurgh. I hate coleslaw.

4. ...preparing a celeriac. Face it. At first it's going to look ugly, and you're going to have to put time and effort into sawing off all the knobbly bits. There'll be dirt and you might even slice your finger a little bit, but the pain is good. It means you're getting somewhere. Then you braise that celeriac with red onion and button mushrooms and serve it with a lovely piece of fresh salmon on the top. I mean, you serve up the finished novel. Obviously.

5. ...kohlrabi. The initial idea keeps turning up in your mental veggie box and you have no idea what you're going to do with it. So you chop it and dice it and mash it and squelch it and pound it and serve it up a million different ways until eventually one of the Masterchef judges/publishers says - actually, this is okay. Yeah. I can eat this. And then you rejoice for thirty seconds before picking up your knife, reaching for a fresh kohlrabi, and trying all over again.

Or perhaps writing is just like having a baby for these reasons:

- to get the thing out there you need to give a really big push. or two. or six hundred. And, golly, that really hurts.

- you feel warmly towards your little WIP sometimes, and other times you wish it would just hurry up and be done with you.

- eating a lot of cake is mandatory.

- when it's over with you're left with something you want to show off to friends, family, and the entire of Facebook and Twitter.

- although it's probably not as perfect as you'd hoped, and since "publication" date you seem to be having trouble sleeping.

- public appearances are fraught with difficulty, you've definitely put on weight, and how come you suddenly have to put up with so much shit?

But writing is definitely not like having a baby because:


- you can forget about writing, have a day off, and go and sit in the garden instead.

- once you've finished your little WIP you can dispose of it if you so choose.

- and you definitely don't have to put it through university or pay for its wedding to another little WIP.

- writing hurts. it really does. but, trust me on this, it doesn't hurt as much as having a baby.

- although while having the baby you can get lots of lovely drugs for free. When you're writing a novel, you have to pay for them yourself.
But I think writing is really just like yoghurt-making:

- There are many different ways to make yoghurt. People argue about the best way to make yoghurt, but really, there is no best way. There's just your own way. You can make yoghurt in the sunshine, or standing in the kitchen. You can use machines to help you make yoghurt, or you can do it the old-fashioned way, with your two hands. (And a bowl and a spoon, but that part of the analogy obviously doesn't fit so well, so we'll gloss over that.) Another person's way of making yoghurt will never work as well for you. You have to perfect your own yoghurt-making.

- Commercial yoghurt is looked down upon by yoghurt purists. Yoghurt with chunkier fruit pieces is usually considered to be harder to get through, but more rewarding when you reach the end of the pot.
- Celebrities should be stopped from making yoghurt. They foist their horrible yoghurt upon the rest of us. That, or they lie, and get a professional yoghurt maker to secretly make their yoghurt for them. This is despicable. Everyone please stop buying these celebrity yoghurts before all the old-school yoghurt-makers go out of business.
- In modern times, yoghurts come with accoutrements, such as little corner helpings of crunchy flakes. Or yoghurt comes in over-processed tubes, to be sucked down and instantly discarded. We are dressing up our yoghurts, but surely traditional yoghurt is the best? However, it is good to be open to changes in the yoghurt industry. Eventually yoghurt-makers will no longer need packaging and will simply squirt their yoghurts directly into the consumers' mouths. This is to be desired. Apron sales will also go up.
- Yoghurt buyers are very susceptible to yoghurt packaging. Women yoghurt buyers like pink pots. Men yoghurt buyers like manly pots in bigger sizes. It used to be true that nobody over the age of twelve wanted to be caught eating a child yoghurt in a ridiculous brightly-coloured little pot in public, but nowadays it's much more acceptable to say you like child yoghurt. Getting in touch with your inner toddler, or some such rubbish. Still, child yoghurts are lots of fun, aren't they? That Harry Potter yoghurt was excellent.

But, however you take your yoghurt, it will always be a very cultured thing to do. 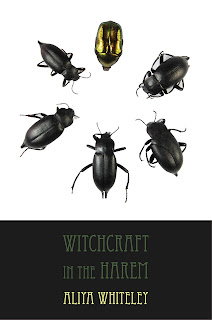 Aliya's book of literary fantasy short stories is out on 3oth April published by
www.doghornpublishing.com

You’re running away from something terrible. You think you’ve escaped it, this thing, but it turns out it’s waiting for you in all the places you hide: your house, your garden, a self-help group, a seraglio, the island of Zanzibar, a museum in Turin, a hot air balloon in Canada, even in the ladies’ room of your favourite nightclub. You’ve carried it into these places with you. It’s inside you. And now it’s time for it to come out.
This first collection of acclaimed short stories by Aliya Whiteley takes the reader to the strangest, deepest corners of life experience. Grotesque, unsettling, and often very funny, Witchcraft in the Harem deals with birth and betrayal, love and loss, and all the terrible thoughts we want to escape, and find still waiting for us at the journey’s end.


Acclaim for the Book
‘The experience of reading this collection is like being waterboarded by an angel. Shocking, heartbreaking and laugh-out-loud funny, this is some of the best writing I’ve ever seen. If you like Aimee Bender or Etgar Keret, you will love Witchcraft in the Harem.’ —World Fantasy Award-winner Lavie Tidhar

Posted by Deborah Swift at 00:30 No comments: